The final #MyStoryMonday is by Ms. Cota, JB Sutton parent who would like to share her pride for her daughter, Amber: “Amber is a very special girl. She is intelligent, has a noble heart, and is full of life. Amber likes to draw and color. She really enjoys watching videos and television on her tablet. Amber’s favorite color is pink because her favorite toy is Ms. Pink from the Among Us game. She has 2 brothers that she gets along with very well and she is not afraid to speak up for herself. And most importantly, we love Amber very much because of who she is!!!” 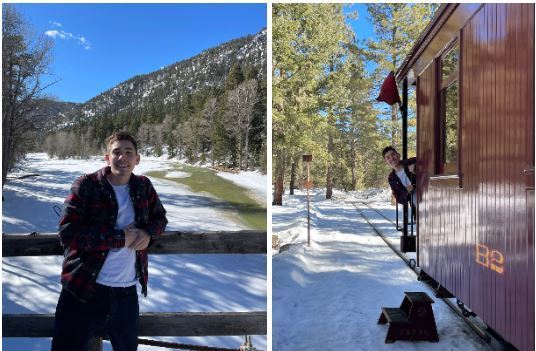 “Our Franky is one of a kind. He is very black and white when it comes to life and what he desires. One desire that has always been consistent is his love for animals. From the age of 2, he has always known exactly what he wanted and didn’t want. Franky is also very particular about who he spends his time with and has no problem telling anyone “no.” I love this about him because he is very confident in who he is! I’d be the first to admit It’s not always the easiest to hear but it’s one character trait that I admire about him.

Franky has brought so much joy into our family in so many ways. At the age of 3, it was apparent that Franky was different from others because he struggled with speech. He was unable to produce sentences that anyone could understand. At this age, Franky had significant development delays and qualified to receive special education services. He completed 2 years of kindergarten, didn’t start reading until third grade, and had an IEP until age 13. Due to early intervention, Franky was able to perform at grade level in his teen years. He successfully finished high school while working two jobs! Franky has an incredible work ethic that helps him achieve all of his goals. He was independent and moved out on his own before he even graduated from high school! This was a huge accomplishment for Franky, considering he didn’t receive any additional support. He graduated from Pima Community College and earned a certificate as a Veterinarian Technician.

There are no words that explain how proud we are of Franky! All I know is that Franky's Autism has never once defeated him, but instead, it has empowered him! Today he is now 21 years old, lives on his own and works full time in an animal hospital. He plans to apply for scholarships and grants in hopes to go back to school in the future to become a veterinarian!

In honor of Autism Awareness Month, we are highlighting members of the Isaac community who have been inspired by the neurodiversity of a loved one during “My Story Monday.” Ms. Hidalgo, JB Sutton parent, would like to share a celebration of her son, Damien:

“Damien is such an incredible kid and he’s so smart! He likes to write and draw a lot. He likes to take photos of his Buzz Lightyears. I say” lightyears” because he has so many of them. I want to say he’s a collector. He Youtubes videos about them and he even insisted I buy him a vintage one. How he knew it was vintage? I don’t know but he loves it and takes really good care of it.

He has 2 siblings that are younger than him and he protects them with his life. He is super helpful. At home, ever since he started kinder, he has learned so much and has come such a long way. He used to be really shy and quiet, now he likes to read and write and is a little more independent. Damien also knows all the schools and mascots in the Isaac School District. I am so proud of him and everything he’s accomplished!”

In honor of Autism Awareness Month, we are highlighting members of the Isaac community who have been inspired by the neurodiversity of a loved one during “My Story Monday.” Our second highlight of the week is presented by Mrs. Natasha Martinez, Director of Student Services, who shares how neurodiveristy has touched her family:

“Dominic brings so much joy to our family. After experiencing significant developmental delays throughout his infant and toddler years, he was diagnosed with Autism at the age of 3. He is a testament to the power of early intervention. With consistent special education services and speech, occupational and physical therapy, he has met and exceeded many developmental milestones and goals. He is quite the character. He has a great sense of humor and enjoys singing and dancing. He loves animals and reading books. Dominic has taught our family the importance of patience, compassion, and respect. These attributes allow our family to keep a very grounded and real perspective on what is truly important in life. Because of all of the amazing services and therapies that exist to support families like ours and kids like Dominic, we know he has a very bright future ahead of him.”

In honor of Autism Awareness Month, we are highlighting members of the Isaac community who have been inspired by the neurodiversity of a loved one during “My Story Monday.” This week Ms. Maribel Hernandez, Esperanza / Sutton SLPA, shares her touching journey with her son, Adam.

Adam was born with a congenital heart defect and cognitive delay. He has had two open heart surgeries at a very young age. He has also had other surgeries and many hospitalizations for other things but has remained a fighter through it all. He has been receiving physical, occupational, and speech therapy since he was a baby and has made a great deal of progress thanks to his entire team and his willingness to improve his quality of life.

Although his young life has not been the easiest, Adam has had a positive attitude through it all. He refuses to let anything hold him back from living life to the fullest. He loves playing basketball. He has taken part in Special Olympics throughout his high school years and has received many gold medals. He is also very active at school. He was manager of his high school basketball team, which was a huge deal. He is very social. He has many friends at school who have embraced his challenges and have never hesitated to include him. I’m thankful to his peers because they have made him feel like a ‘typical’ young man.

Adam will be graduating from high school this year. Me being a proud mom is an understatement. He has defied many odds that were stacked against him so to see him accomplish this huge milestone is a testament to our faith. Without faith, nothing is possible.

Adam is the light of my life. Before I had him, I didn’t know what to do in life. I was young. I was still finding out who I was and wanted to be. Adam gave me purpose. I am so blessed to have such a special son. I love you, Adam!” 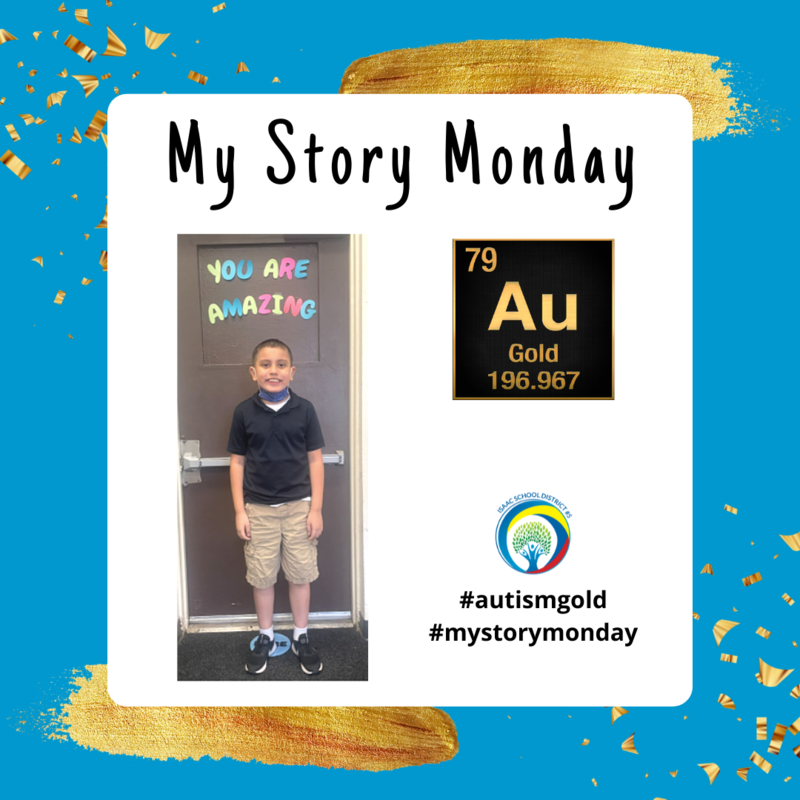 In honor of Autism Awareness Month, we are highlighting members of the Isaac community who have been inspired by the neurodiversity of a loved one during “My Story Monday.” This week an Isaac parent, Ms. Briones Jimenez, shares a celebration of her son and J B Sutton Elementary School student, David.

“David is a happy boy. He is affectionate, respectful, obedient, kind, sweet and super responsible.
His favorite animal is an elephant

David is very independent!
He likes school very much and we are very proud of his achievements.
David has taught us unconditional love.
David is not different.
David is authentic.”

Ms. Esmeralda Maldonado, Special Education Paraprofessional at Mitchell and Esperanza Elementary, is our second highlight for #mystorymonday. Thank you, Ms. Maldonado, for sharing your family’s journey alongside your amazing daughter (and former Isaac student), Deanna.

“When Deanna was born I knew she was different from her other siblings. She was challenged with a learning disability and speech impairment as well as Autism. Despite that, Deanna has the ability to find happiness in the simplest things in life. As for me as her mother, I have found in her the resilience to overcome any difficulty. Deanna never says that something is beyond her reach and we are proud that she has that mental strength to try things that others said would be impossible for her.

Deanna is 19 years old and was recently featured in the magazine “This is who we are” by sharing her interests, dreams and goals to become an independent adult. She has a deep love for the arts. She has danced folklorico since elementary and often learned the choreography faster than her peers. She has participated in many cultural activities in her community showcasing her Mexican heritage. Deanna is also great at hip hop and even makes her own choreography! Swimming is her favorite pastime in the summer as it is for every Phoenician. She could swim on her own for hours and never get tired. During the pandemic she widened her skills on the computer which she used to teach a class in Sunday school via a powerpoint she made on her computer. She presented this class with no help and couldn’t be more proud of herself for doing something of such caliber. And yet with all these personal interests and talents her most poignant ones are the love and care she offers freely to all whether they be nieces and nephews, peers or adults. If there’s someone who needs a pick me up and attention she doesn’t need to be asked, she leaps into action and changes frowns upside down. In short, if we could describe Deanna with only a few words, those words would be empathetic, joyful, and guardian and we are grateful for all she is and brings to our lives.” 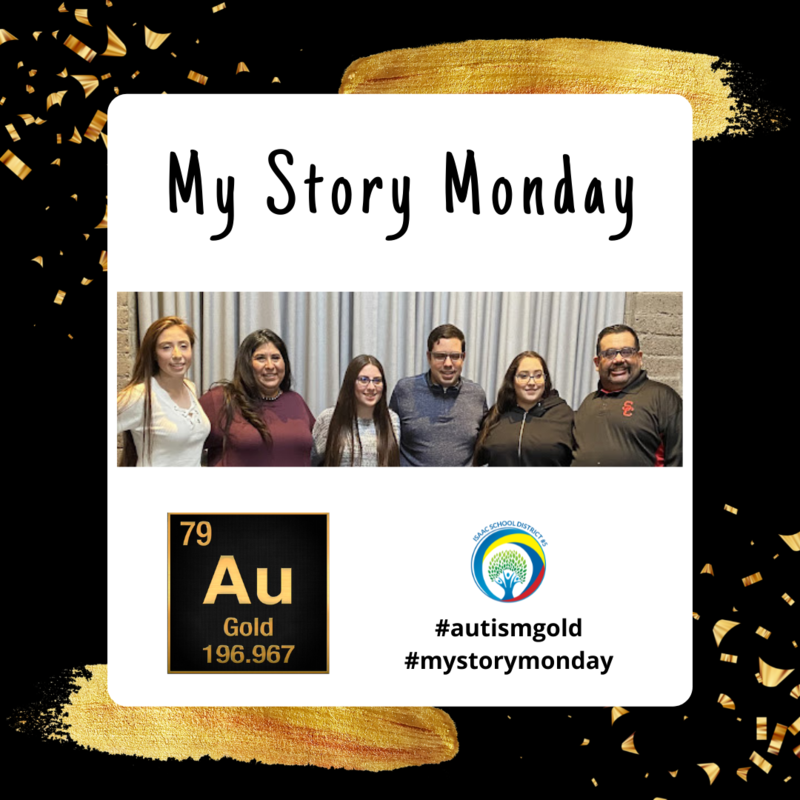 This week for #mystorymonday we would like to share Ms. Elena Estrada and her husband’s experience in raising their son Brian.

“My husband Armando had this to say about our son:

I remember this poem Good Timber, it reminds me of our son Brian as nothing has come easy and our son exemplifies strength through his hard work. Its message is that people grow and reach their true potential, like trees. It also shows that through struggles, like a tree that is fighting through forest growth to reach the sun, that people grow and discover their true potential. It is about the AMAZING journey and experiences we all share as a family raising our son.”